Are swords “a bit much” in response to the “Great Monkey Threat of Umdloti”?

Monkeys. Bloody cute little monkeys.
They sit on the balcony looking it. A look that seems to cry out “Let me attack your cheeky face human man”

Ok I lie They just seem interested in rooting through the bins and maybe having a glass of sherry whilst smashing a plate and shitting on your LCD television and decoder.

Im staying at a friends place in Durban. The comic Glen Bo. He has a lovely little beachfront flat overlooking the ocean.
Everything in the block is tied down, bolted up and monkey proof. Leave the windows open. You will have monkeys indoors.

Last time I was up in these parts, I was with another comic, Dave Levinsohn in Amanzimtoti. We saw a vervet monkey and it turned on us. Starting doing this little monkey dance and basically wanted a fight. I shat myself.
Mostly because I was taking a piss in the bushes at the time. I think it took a look at my manhood and figured I was a contender for the Alpha Male position in the troop.

So here I sit. Typing away with a lovely view, only blighted by the possibility of imminent monkey attack.
In preparation for the hostility. It seems Glen Bo is either well prepared for Simian attack, or he has a bit of explaning to do. Are you into live action role playing Mr Bo? Why do you have two swords and a knobkerrie hanging around. I suspect he is a closet LARPER.

Do not worry. I think Glen is more show than the little monkeys are. Although if one of those little buggers draws a sword on me. Just know this. It is bloody well on. 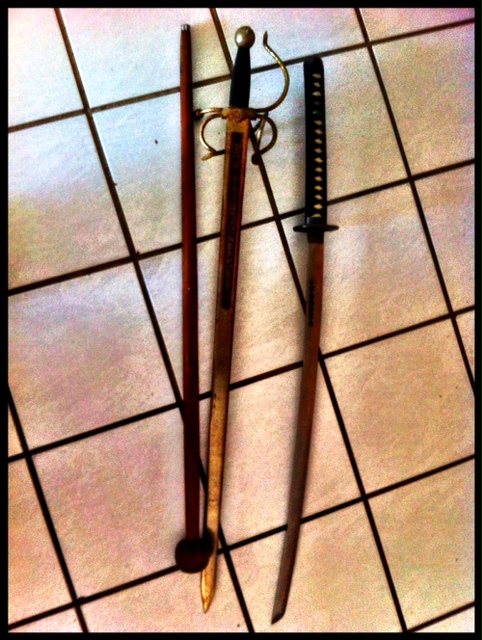 2 thoughts on “Are swords “a bit much” in response to the “Great Monkey Threat of Umdloti”?”

There was an error retrieving images from Instagram. An attempt will be remade in a few minutes.